On September 21st, singer-songwriter Rory Feek celebrated the release of an album and DVD set that is one part love letter to his late wife Joey and one part chronicle of their Grammy-winning career as a country music duo. The Singer And The Song: The Best of Joey + Rory is a collection of more than a dozen of their most beloved hits, while the two-and-a-half hour long DVD provides an up-close-and-personal look at their timeless love story. Find out more about it at Country Music News Blog dot com END_OF_DOCUMENT_TOKEN_TO_BE_REPLACED

The Judds return to national television October 12 as they provide “Pickler & Ben” an exclusive walk through of their exhibit, The Judds: Dream Chasers, at the Country Music Hall of Fame® and Museum. Naomi and Wynonna provide hosts Kellie Pickler and Ben Aaron in-depth stories about The Judds’ rare artifacts, original manuscripts, unpublished photos and keepsake costumes on display. END_OF_DOCUMENT_TOKEN_TO_BE_REPLACED

Carrie Underwood is no stranger to strong performances, and last night’s American Music Awards was no exception! The Checotah Cherub gave an amazing, even by her standards, rendition of her latest single “Spinning Bottles” to a stunned crowd that cemented her place in music legacy among the likes of Celine Dion, Whitney Houston, and Reba McEntire.   You can catch Carrie Underwood in all her Cry Pretty glory on the 2019 Cry Pretty 360 tour, with tickets available at CountryMusicOnTour.com

CMT IS SPOTLIGHTING MULTIPLE GENRES AND GENERATIONS AT “2018 CMT ARTISTS OF THE YEAR” WITH SEVEN NEW PERFORMANCES.

This weekend country superstar, Carrie Underwood, opened up to CBS Sunday Morning about her coming 2nd child and all of the heartache that came before this pregnancy. END_OF_DOCUMENT_TOKEN_TO_BE_REPLACED

REBA MCENTIRE is set to return as host for the ninth annual CMA COUNTRY CHRISTMAS program, to be taped on THURSDAY, SEPTEMBER 27th at BELMONT UNIVERSITY’s CURB EVENT CENTER in NASHVILLE. Tickets for the taping are on sale now. Visit Country Music News Blog to learn more. END_OF_DOCUMENT_TOKEN_TO_BE_REPLACED 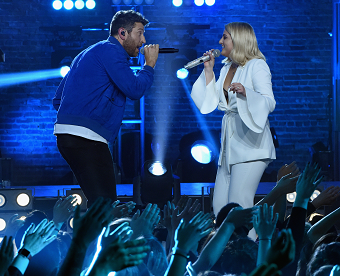 Set your dials and mark your calendars because CMT closes out its summer of electrifying music with the announcement of an all-new “Crossroads” mashup featuring multi-platinum, Grammy Award-winning pop superstar Meghan Trainor and platinum selling singer/songwriter Brett Eldredge premiering Monday, September 3 at 10 PM ET/PT. “Brett and I have known each other for a few years now and I am such a fan of not only Brett’s music, but him as a person,” said Trainor. “We first worked together on the song ‘Baby It’s Cold Outside’ for his Christmas album, so I was thrilled to collaborate with him again on ‘CMT Crossroads.’ He’s a superstar and I was star struck during the whole performance!’’ “I just love Meghan’s sound – she’s got a funky, swaggy thing to her music that no one else is doing,” said Eldredge. “She’s one-of-a-kind and I’m excited to perform with her again, this time on ‘Crossroads.’ We’re going to make everybody feel alive. We’re going to make them feel it in their hearts and their souls. We’re going to bring big vocals and magic moments.” Taped earlier this year, the one-hour show features popular hits including Trainor’s “All About That Bass,” “No Excuses” and current single “Let You Be Right,” from her upcoming album, Treat Myself. The two friends also collaborate on Eldredge’s “Drunk on Your Love,” “Wanna Be That Song,” “Haven’t Met You” and the classic Kenny Rogers and Dolly Parton duet, “Islands in the Stream.” The news comes on the heels of impressive ratings growth for CMT which is on track to have its highest rated year since 2014. In F3Q’18, CMT was one of just 10 channels in the Top 50 to show YOY growth in P18-49. CMT has notched 6 consecutive quarters of YOY growth among P18-49, which is the longest active streak in all of television. Grammy-Award winning singer, songwriter, and multi-instrumentalist Meghan Trainor emerged with her 2014 breakout single “All About That Bass” and disrupted contemporary music with nostalgic pop beats and powerhouse vocals that delivered a worldwide anthem for female empowerment. Trainor cemented her rising status as one of the most prominent artists in popular music by charting seven multi-platinum singles, releasing two platinum albums, selling out three headline tours, writing multi-platinum hits for top pop and country artists, and receiving countless industry awards and nominations worldwide. She is one of only five female artists to receive a diamond certification for her hit single “All About That Bass” which shares the RIAA Gold & Platinum Awards top honor with only 15 other singles in history. After wrapping up her first season as a panelist on FOX’s hit series THE FOUR: Battle for Stardom, Trainor released her first single “No Excuses” from her highly-anticipated third-studio album, Treat Myself. She followed that up with the irresistible summer smash “Let You Be Right” and returned to television on the second season of THE FOUR. Platinum selling singer/songwriter Brett Eldredge recently released his brand new single “Love Someone” from his self-titled END_OF_DOCUMENT_TOKEN_TO_BE_REPLACED

Mark your calendar and clear your schedule this Wednesday night at 8/7c as ABC brings us the hottest party of the summer with great performances from the 2018 CMA Music Festival, hosted by Kelsea Ballerini and Thomas Rhett! Performers this year include Luke Combs, Carrie Underwood, The Brothers Osborne, Blake Shelton, Chris Stapleton, Dierks Bentley, Jason Aldean and SO MANY MORE! For a full line-up visit our friends at the CMA website!

RIVER HOUSE/COLUMBIA NASHVILLE’s LUKE COMBS will join forces with GRAMMY-nominated R&B artist LEON BRIDGES for a special edition of CMT-TV’s “CMT Crossroads” series. The performance is set to take place over Broadway in downtown NASHVILLE for an outdoor concert experience on TUESDAY, JUNE 5th. The free taping is open to fans at 5th and Broadway in NASHVILLE; gates will open at 7p (CT), and the show will begin at 8:30p (CT). The CMT-TV premiere is set to air on THURSDAY, JUNE 28th at 10p (ET/PT).