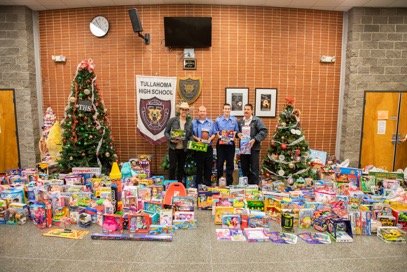 RAISES OVER $36,000 FOR HOMETOWN CHARITIES STAY COUNTRY HEADLINE TOUR ON TAP FOR 2020; FOURTH ALBUM, TULLAHOMA, OUT JANUARY 17 NASHVILLE, TENN. (December 19, 2019) – In the spirit of the holiday season, Broken Bow Records superstar Dustin Lynch continued his tradition of giving back to the town that built him with the 6th annual Dustin Lynch & Friends Benefit Concert on December 17 in Tullahoma, TN, raising over $36,000 for local charities Isaiah 117 House and the Coffee County Children’s Advocacy Center in addition to collecting toys for the Tullahoma Fire Department’s Toys for Tots drive.

Why I Love Country Music: Reaching Beyond Borders. I have a confession to make: I wasn’t raised on country music. No, it’s not that I just lived in New York and one day took a vacation to Nashville and it was all there in front of me. I mean I’ve never actually been to America. I have lived in England all my life, and being still in my early twenties I have never been able to afford to travel outside Europe. I discovered country music through watching American Idol, the artist who introduced me being Carrie Underwood. Although I tend to dislike country pop now, I still love her and hold her music dear because of the nostalgia I feel for the music I grew up with, through my teenage years. I was 13 at this point; a pop music fan as any young girl is, but being a bit of a social outcast and not really being interested in the rock that my few friends listened to (it was just too aggressive for me), country seemed to hold a happy medium of sorts. To me, the country/pop that I was exploring held more lyrical meaning for someone who was writing songs at the time, and had a lot of pent-up emotions, than pop music did. In addition, it was friendlier than rock music; the hyper-male aggression that that involved just didn’t suit me, being a young, timid, middle class teenage girl. But the more country music I heard, the more it seemed to speak to me; I found Dolly Parton when I was 14 and her girliness yet honed craft of emotional songwriting, combined with her feminine pride and exploitation of conventional female beauty, made sure that she became my idol. She also introduced me to so much other music, particularly that pre-2000 that I had no idea about. I knew nothing of the poverty she had suffered or her rags to riches story in relation to my own life, I knew nothing of life in the South or the kind of middle-of-nowhere small towns that inhabit them. In England, even small towns and villages are no more than an hour or so’s drive away from a city. The geographically extended community of country music was alien to me, yet it was this precise extended community feeling that attracted me. I didn’t connect with many of the people at my school. Isolation is a key component of country music’s appeal; it brings together like minded people who are otherwise miles apart. I felt like I suddenly belonged somewhere, and on the internet nobody is going to judge you. Or at least, it doesn’t feel like they are. With the internet now, increasingly country music fans (particularly the younger ones) are from wider walks of life. Country has lured them because it has promised a friend, something to support them in their toughest times and offer a song to cry to. Online forums and social media are perpetrators of this, END_OF_DOCUMENT_TOKEN_TO_BE_REPLACED